I love sheep milk cheese. Here's a couple that I've tried lately, and one that I tried a few months ago. I recommend all three of them. 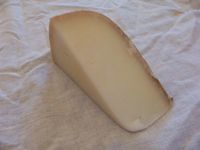 The first time I tried Ossau-Iraty I brought some home for some dinner guests. My small wedge dissappeared quickly.

Ossau-Iraty is probably the most complex cheese I've had. It's hard to describe the taste, and each bite almost taste a little different. It has a meadowy, grassy, and earthy taste. To me it doesn't taste like a sheep milk cheese because it doesn't have the sheepy taste I've had in other cheeses like Pecorino Romano, Manchego, or Idiazabal. And though the taste is complex, it is rather mellow.

The texture is semi-soft and slightly elastic. The cheese almost melts in your mouth.

We bought Ossau-Iraty at Nugget Market. If you are looking for it online, we have links on our Ossau-Iraty page in our cheese guide. 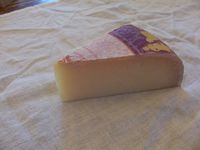 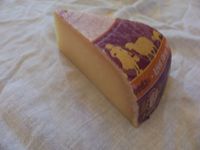 Ewephoria was recommended to me at the cheese counter at Nugget Market. I was looking for Lamb Chopper, but they were out of stock. The employee at the counter said that Ewephoria was very similar to Lamb Chopper. I'm not sure how much I'd agree.

Like Lamb Chopper, Ewephoria is a Gouda-like cheese from Holland that is made from sheep milk cheese instead of cow milk. However the taste is very different.

Ewephoria did have a hint of sheep milk, but the strongest flavor was that of caramel. The flavor surprised me; I didn't think cheese could taste that caramelly.

The texture was drier than the Ossau-Iraty, almost Cheddar-like. It has a thin, inedible rind.

You can read more about Ewephoria in our cheese guide. 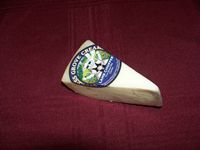 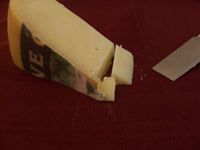 I wasn't able to get any new wedge of Lamb Chopper for this review, but I have some photos from a few months ago.

Though the lady at the cheese counter said that Ewephoria and Lamb Chopper were similar cheeses, I want to note what makes the two cheeses different.

Lamb Chopper has a much more sheepy taste to it. The taste reminds me of Pecorino Romano, but much less bold, and much less salty. It did not have the caramelly flavor that Ewephoria had.

I've seen Lamb Chopper in two different high-end grocery stores, but it's not always in stock. If you want to buy some online, you can find links on our Lamb Chopper page on our cheese guide.

Ossau irati has been my absolute favorite cheese ever since I first tried it!