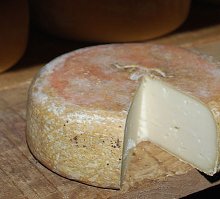 Ossau-Iraty is a semi-firm, pressed, uncooked cheese made from unpasteurized sheep milk in the Northern Basque and Béarn areas in the south west corner of France.

The cheese has a hard, natural rind that may be gray or reddish in color. The interior is ivory in color, usually with no holes. The interior has a slightly oily and slightly elastic texture. The sizes of the cheese range from 2 to 3 kilos (about 4 to 6 and a half pounds) to 4 to 5 kilos (about 9 to 11 pounds). The cheese is aged at least 3 months, often longer.

Ossau-Iraty has a very complex, yet mild flavor. And depending on who you ask, the description of that complex flavor is very different. Common descriptions include smooth, grassy, and nutty. It has also been described as having hints of olives, mushrooms, figs, herbs, and spices.

The cheese is often served with black cherry jam.

Ossau-Iraty gained French AOC status in 1980 and European PDO status in 1996. This means that for the cheese to be labeled as Ossau-Iraty it must meet certain requirements. Among these are the requirements to use local, unpasteurized milk from the Manech or Basco-Bearnaise breeds of sheep, and can only be made in a certain geographical area. Both farm-made and factory made cheeses are allowed. There are only two AOC protected cheese in France made from sheep milk; the other one is Roquefort.

Though the cheese has been made for hundreds of years, and perhaps even thousands of years, it has only been called Ossau-Iraty since 1980. Before the cheese had its AOC status, it was called different by different names, often depending on which town or area the cheese was made in. 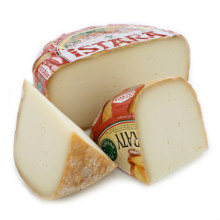 Ossau-Iraty is probably the least well known of France's AOC cheeses, so is difficult to find in stores in the United States. I did find some at Nugget Market in northern California, so there are stores that carry the cheese.

You can also find the cheese online at amazon.com and fromages.com.

This is the tastiest cheese I have ever eaten. Goes with snacking to formal dinners . I am from New Jersey and get it from DiBruno's on 9th st in south Philly .DiBrunos has mail order And is very reliable . A must try

We have 2 recipes for Ossau-Iraty in our recipe section.