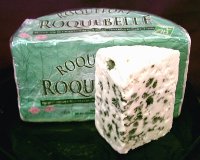 Roquefort is a Blue Cheese made from sheep's milk in France. It is one of the most famous blue cheeses in the world, and is sometimes called the "king of cheeses" in France. The milk comes from the Lacaune and Manech and Basco-Béarnaise breeds of sheep.

Roquefort has a strong smell and a strong taste. The cheese is white, semi-hard, crumbly, and slightly moist. It has veins of green mold throughout the cheese. It has a tangy, sharp flavor. The cheese is aged about 3 months.

The mold Penicillium roqueforti is found in the soil in caves where the cheese is matured. Cheesemakers used to get mold by leaving bread in caves for several weeks. The bread would become moldy, and the interior of bread then dried and made into a powder. In modern times, P. roqueforti is made in a laboratory, which creates greater consistency and quality. Mold is added to the curd or is added through poked holes in the rind during production.

Roquefort cheese has been around for quite a long time. A cheese strainer was found in the area believed to be older than 2000 BC. Roquefort cheese was described by Pliny the Elder in 79 AD. Other documents describe the cheese in 1070 AD.

There are a few variants on the legend of how Roquefort cheese was invented. They usually go something like this: A shepherd boy was eating lunch in a cave in southern France when he saw a beautiful girl. He decided to chase after the girl and left his lunch in the cave. Sometime later, after being unsuccessful in finding the girl, he returned very hungry back to his cave, to find that the cheese he left behind had become moldy. Famished, he decided to eat the cheese anyway, and discovered that the mold improved the cheese's flavor.

The name Roquefort is protected by law in Europe. To be labeled as Roquefort, the cheese must be made in certain areas of Southern France, aged in caves at Roquefort-sur-Soulzon, with a certain type of sheep's milk, and fo llowing certain procedures. It can be made in the department of Aveyron and parts of Aude, Lozère, Gard, Hérault and Tarn. 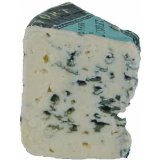 Roquefort is a heavily exported cheese, and can be found at many cheese shops or high-end grocery stores throughout the world. You can also find it online at amazon.com