The cheese is light, off-white in color, with a wax rind similar in color to the cheese. It has a buttery, nutty flavor. The taste is mild, yet complex, with a lingering aftertaste. The flavor reminds one of Pecorino Romano, but less salty and much more mild. 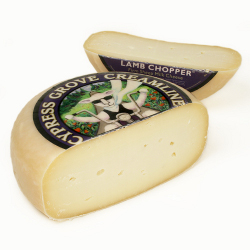 Wheels of Lamb Chopper weigh 9 lbs. On the rind there is a logo of a lamb riding a chopper (motorcycle).

We've found Lamb Chopper in a few high-end grocery stores in Northern California. You can also purchase it online at amazon.com.

I absolutely LOVE Lamb Chopper! I have an allergy to cow's milk, so I've been 'cheeseless' for quite some time. I tried goat's milk cheese, but it's just a little too strong for my taste. This sheep's milk cheese is just right for many uses! Hurray for Lamb Chopper!