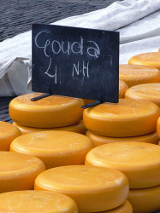 Gouda is a cow's milk cheese named after the city of Gouda, Holland. It is a yellow cheese, usually made from pasteurized milk, though there are some unpasteurized varieties. Gouda is the most famous Dutch cheese, and accounts for more than 60% of all cheese made in Holland.

Gouda is sweeter than many cheeses because of the way it is made. When the whey is drained from the curd, water is added and some of the lactic acid is washed away. The curd is pressed into a mold. The cheese is washed in brine, which adds to the cheese's flavor. The cheese is then dried for a few days, and then coated to prevent it from drying out.

The cheese is either mild or strong, depending on its age.

The name Gouda is not protected, and so Gouda cheeses are made around the world, not just in the Netherlands. There is one protected variety, however. The name Noord-Hollandse Gouda is protected by law. The name means North Holland, which may seem confusing at first because the town of Gouda is in the south of Holland, not the north. Northern Holland is where some of the best pasture land is in the Netherlands. This is where land has been reclaimed from the sea by a system of dikes.

There are lots of varieties of Gouda, including smoked Gouda, Gouda flavored with cracked pepper, cumin, caraway, herbs, garlic, pesto or walnut, and there is even a goat's milk Gouda.

Among its many uses, Gouda goes great with crackers, fruit, or used in fondue.

Since Gouda is a fairly common cheese, you can find it in most grocery stores.

has Gouda cheese. Note: not all the Gouda on Amazon is from Holland, so read the product description if you're looking for the real thing.

I want to buy your Gouda cheese on amazon usa. I live in Japan. Can you ship to Japan?

We have 2 recipes for Gouda in our recipe section.