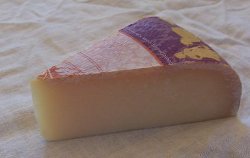 Ewephoria is a pasteurized sheep milk cheese from North Holland. The cheese is made as a Gouda style.

This Dutch cheese very obviously doesn't have a Dutch name. It is a joint venture between a small family owned farm in Holland and CheeseLand, a Seattle-based importer of Dutch cheeses. The cheese was developed for the American market. It is also a relatively recent cheese, first appearing somewhere around 2004.

Ewephoria is surprisingly sweet for a cheese. It has somewhat of a subdued sheepy taste that you'd expect from sheep milk cheeses, but the strongest flavor you experience is that of caramel or butterscotch.

The cheese is aged 4 to 12 months, is somewhat dry, and semi-hard. It has a thin, inedible rind with the cheeses distinctive label. the cheese is made into wheels that weigh about 10 pounds.

We reviewed Ewephoria (and a couple of other sheep milk cheeses) in December of 2010. You can read our Ewephoria Cheese Review (and watch the video) here.

Ewephoria is not a very common cheese. We found our wedge at Nugget Market in northern California. It can also be found online at amazon.com and Murray's Cheese.

I tried a piece of Ewephoria in New York at a Cheese stall in the Grand Central Station Food Hall. It was really great!

Will definitely try some when next in Holland. Bit off the wall tho to have Dutch cheese in USA!