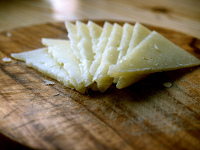 Manchego is a sheeps milk cheese from the La Mancha region of Spain. It is made from the milk of the manchego breed of sheep. The cheese is semi-firm with small holes and a rich golden color. It is similar to feta in taste, but less salty. Depending on how long the cheese is aged it has a mild to sharp taste.

Manchego made in Spain is protected by Denominaci?n de Origen laws. (see "PDO" in the glossary) It must be made from fresh milk from manchego sheep and aged a minimum of 2 months in natural caves. Manchego cheese has been around since at least the 4th century.

Mexico and the United States also have manchego cheese, but origin and method of production are not regulated.

We have 22 recipes for Manchego in our recipe section.