In early January I reviewed 2 sheep milk cheeses from La Tienda, both very similar to Manchego, except with rosemary added to the cheese. To compare the two cheeses, I bought a wedge of regular manchego at a local grocery store. In my review, I admitted that Manchego wasn't my favorite cheese.

Well, the nice folks at La Tienda read my review, and sent me an email. They really wanted me to try their artisan Manchego. I consented, and they sent me 2 pounds of Villajos Manchego.

It's obvious to me now that the only reason that I wasn't a big fan of Manchego, is that I've only ever had mediocre Manchegos in the past. This stuff was good.

La Tienda claims that "Villajos Manchego cheese is arguably the best in Spain." And they might possibly be right.

The first thing you notice when you cut open the packaging is the aroma. The cheese has an herby, citrusy, sheep milk smell. Already I was excited.

The rind was a little oily to the touch, but the interior paste of the cheese wasn't. The somewhat oily flavor of other Manchegos I've tried has somewhat put me off, but my sample of Villajos Manchego wasn't like that at all. This Manchego was drier, in comparison to cheaper Manchegos that I've tried.

The cheese is firm, not too hard, and somewhat brittle. I tried to bend a thin slice to see how pliable it was, and it broke along a jagged edge, revealing an attractive texture. The cheese has small, irregular wholes throughout the cheese, like most Manchegos.

The rind was a little harder than other Manchegos I've tried in the past, but still edible. 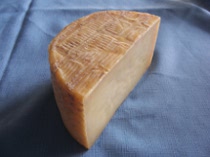 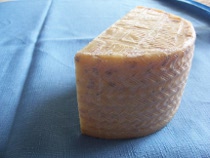 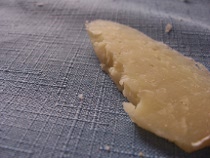 It's much easier to explain the appearance of this cheese than it's taste. When I reviewed Ossau-Iraty, a French sheep milk cheese, a little more than a year ago, I called it the most complex cheese I've had. Villajos Manchego is almost as complex.

My first reaction on my very first nibble was "Wow, this is a little sharp." It had the same initial kick I often experience from a good Pecorino Romano. But the sharpness doesn't last long. Underneath it are very deep, complicated tones of herbs, earthyness, and sheep milk. Sheep that graze on fresh grasses and herbs produce complicated cheeses. After several nibbles, the cheese reminded me of an aged Parmigiano-Reggiano, but drier, and much more complex.

So much better than the Manchego I've purchased from my local grocery store.

Usually by now, I'd stop nibbling, but this was really good cheese. I'd buy some if I were you. (As of the time of this review, it happens to be 20% off, too!)

What to do with 2 pounds of Manchego?

Okay, so I didn't want to nibble all 2 pounds. But I didn't know what do to with nearly two pounds of Manchego. I used to live in Italy, and if you gave me two pounds of Italian cheese, I could find several uses for it.

The recipe section of itscheese.com was completely lacking in Manchego recipes. There are now 22. I decided to try a couple.

Neither one turned out liked I hoped. I tried the recipes for Black Pepper-Manchego Cheese Puffs, which everyone said tasted good, but no one wanted more than two.

I also tried the recipe for Honey Glazed Fried Manchego Cheese. Not sure what happened, perhaps the cooking oil was too hot, but the outside burned very quickly, and the cheese inside didn't melt. And we had to air out the house.

Looks like I'll just have to have Manchego cheese on the dinner table for a few days. So far the best thing I've found to do with Manchego is just to eat it. 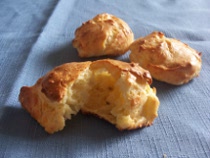 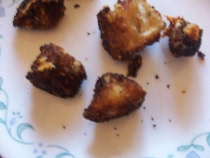 I think I am in the wrong line of work.