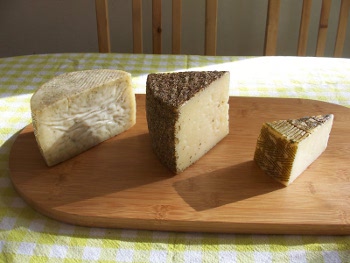 It should be noted that of these three cheeses, only one meets the legal definition of Manchego. In Europe, where they are more fussy with cheese names than we are here in America, certain cheese names are protected. Manchego cheese, for example, must be made from milk of the Manchega breed of sheep, in the La Mancha region of Spain, among other things. The other two cheeses reviewed here would meet the requirements if they didn't have rosemary added to them. 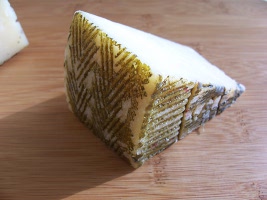 The Manchego we bought was really an afterthought. We decided it would be a good idea to stop at our favorite cheese-carrying grocery store for a wedge of the real stuff to compare with the rosemary cheese.

I love sheep milk cheeses, but to be honest, Manchego is not my favorite. I could nibble on Pecorino Romano all day, but probably not any of the three Manchegos I bought.

This Manchego was good, but nothing too special about it. It had a creamy, semi-soft texture to it. The taste was mild, with a slight oiliness to it. Overall a good cheese, but not one I was excited about. 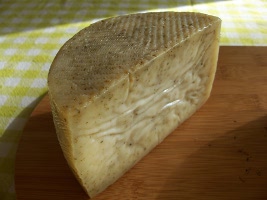 Out of the three cheeses, this one was my favorite. The rosemary was there, but not overpowering. It enchanced the flavor of the cheese, making it more interesting.

Also, compared to the other rosemary cheese, the rosemary in this one wasn't as dry.

The first thing that excited me about latienda.com's Rosemary-infused Sheep Milk Cheese was the labeling. It was in Spanish. Well, mostly Spanish; there was some English on the labeling as well.

I also appreciated that there was a manufacture date on the cheese as well. I like knowing how old my cheeses are. 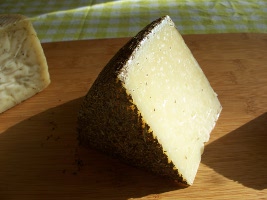 Latienda markets this cheese with quotation marks around the word 'Manchego', since the rosemary-coated rind keeps it from being a true Manchego. The cheese was good, and had a stronger rosemary aroma than the rosemary-infused cheese, but less of a rosemary taste.

Joe liked this cheese best, but I didn't particularly like the rind -- too much dried rosemary in your mouth at once.

The cheese was pleasant to look at, however, and probably would make a more attractive cheese than the rosemary-infused cheese at your next party. It also became a little messy, as bits of rosemary fell off of the rind. 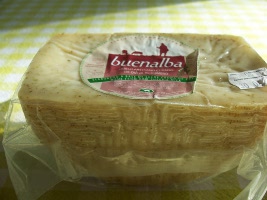 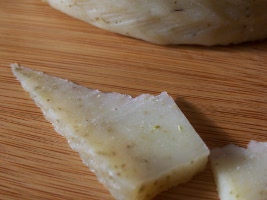 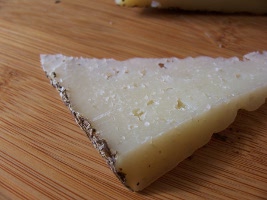 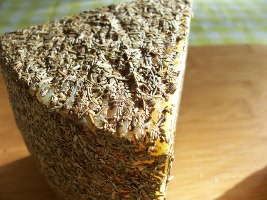 Hello!
I I wonder if some cheese with rosemary is patented by you.