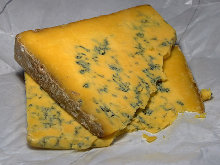 Shropshire Blue is a cow's milk blue cheese originally from Scotland but now made in England. It is similar to Stilton. Though many cheeses in Europe are named from the place of production, Shropshire Blue has nothing to do with the county of Shropshire.

The cheese is made using pasteurized milk and vegetarian rennet.

Shropshire Blue has been called a cross between Stilton and Cheshire, though this is not very accurate. The cheese is much more similar to Stilton. The interior of the cheese is similar in color to Cheshire, however, as both cheeses are colored with annatto. (As are most Cheddars and other similarly colored cheeses.)

The cheese is made into drums about 8-9 inches in diameter, 14 inches high, and weighing about 17 lbs. The cheese has a light brown exterior, with an orange interior. The orange interior has blue and green veins of mold throughout the cheese from the same mold that makes Roquefort blue: Penicillium roqueforti. Shropshire Blue is a semi-firm cheese, and is somewhat crumbly. It is aged about 12 weeks, sometimes longer.

Compared to Stilton, Shropshire Blue is a little sharper, slightly moister, slightly tangier, and has a slightly softer texture.

The cheese has a sweet aftertaste reminiscent of burnt caramel and goes well with sliced apples and pears.

Shropshire Blue was developed in the 1970's by a cheese maker named Andy Williamson at the Castle Stuart Dairy in Inverness, Scotland. Williamson had been trained in Stilton making in Nottinghamshire, England. Originally the cheese was called Inverness-shire Blue or Blue Stuart, though the name was changed to Shropshire Blue to make it more marketable.

The Castle Stuart Dairy was closed in 1980, and production of Shropshire Blue ceased. It resumed briefly by a dairy in Cheshire County. Production then was taken up at the Long Clawson Dairy and Colston Bassett Dairy in Nottinghamshire. Today the cheese is made by many dairies that make Stilton, as the cheeses are very similar. 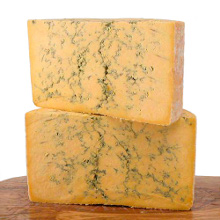 An alternative history has the origins of Shropshire Blue going back to the 1920's or 1930's, being first created by a cheese distributor named Dennis Biggins. Though we at itscheese.com aren't 100% sure which history is correct, most sources point to the cheese being developed by Williamson, not Biggins, and to the cheese being developed in 70's, not the 20's or 30's.

Thank you for fine description & history. So glad to find this cheese & Stilton available here, as cannot find it on Long Isla

Where can I buy Shropshire Blue cheese in Cornwall?

We have 1 recipe for Shropshire Blue in our recipe section.