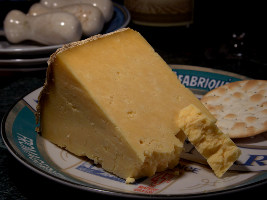 Cheshire Cheese is a dense, crumbly, cow's milk cheese from England. It is made in the English county of Cheshire, its namesake, as well as 4 other nearby counties: Shropshire and Staffordshire in England, and Denbighshire and Flintshire in Wales.

Cheshire is one of the oldest British cheeses, and is perhaps the oldest. It receives mention in the Domesday Book -- an inventory commissioned by William the Conqueror in 1086 twenty years after he conquered England so he would know how much his kingdom was worth.

Cheshire is slightly tangy, with a bit of a milky taste. It is usually aged about 8 weeks, though there are older versions of Cheshire. The texture is firm, but very crumbly.

There are three types of Cheshire Cheese -- red, white, and blue.

White Cheshire is the normal variety. It is pale yellow in color.

Red Cheshire is exactly the same as White, but it has been colored with the vegetable coloring annatto. Red Cheshire is actually closer to being yellow or orange than red. Red Cheshire originally came from Wales, but became so popular that many people began to believe that the Red version was the normal version. Producers in England had to start adding annatto to their cheeses in order to compete.

Blue Cheshire is White Cheshire with veins of blue mold throughout the cheese. It is more mild than the Stilton. Production of Blue Cheshire ceased in the 1980's, but has recently been revived.

There is an old pub in London called "Ye Olde Cheshire Cheese".

Legend has it that the famous Cheshire Cat from the Alice in Wonderland story was inspired from a grinning cat on a Cheshire Cheese label.

We tried some Cheshire Cheese we found in a specialty grocery store. You can read our review to see what we thought of it. 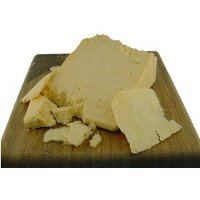 Cheshire Cheese is a popular cheese in England. People who live elsewhere can purchase it online at amazon.com.

Hello. I was just wondering. If I but this cheese, how long will it last in my fridge? Thanks.

In response to "di", I've read that this cheese can be stored in the freezer, so you might want to just cut off the amount you plan to use, and store the rest. If wrapped well, it can probably last quite a while in the freezer. Finding this stuff for less than $80-100 outside of Britain is the real problem.