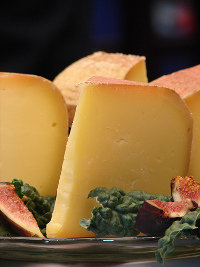 Cheddar is perhaps the best known cheese in the world.

Cheddar gets it's name from the village of Cheddar in the county of Sommerset in southwest England. Cheddar has been produced since at least the 1100's. Historical documents show that King Henry II ordered 10,420 lbs of cheddar cheese in the year 1170.

People generally associate cheddar cheese with the color orange or yellow, but cheddar is naturally a pale or creamy white. Cheddar gets its orange color from annatto, a vegetable coloring derived from achiote trees. Annatto has been added to cheddar since at least 1860. The reasons for coloring cheddar are not clear. One possible reason is that cheeses that were richer and had a higher fat content turned yellow over time. Adding annatto may have given cheaper cheeses the appearance of more expensive cheeses.

Unique to making cheddar cheese is the process of cheddaring. This involves stacking "loaves" of curd and turning those loaves every 10 minutes. This process gives cheddar a distinct flavor.

Cheddar is made in many parts of the world, and so the name "cheddar" is not protected. However, to be labeled West Country Farmhouse Cheddar the cheese must be made in one of the English counties of Somerset, Devon, Dorset, or Cornwall. It must be made with local ingredients and be made in the traditional manner.

You can see in the photos the difference between factory-made cheddar and hand-made cheddar.

You may find a cheese called "Longhorn Cheddar" in the store. Longhorn is actually a type of Colby cheese, which is similar to cheddar, but does not use the cheddaring process and has a different taste and texture.

West Country Farmhouse Cheesemakers have a website about the PDO cheese. Their website has lots of information about the traditional way cheddar is made. You can also order their cheese online if you live in the mainland UK or Northern Ireland. 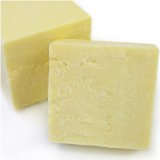 You can find tons of different Cheddars at amazon.com.

Is there any difference in nutritional or additives that are detrimental??

We have 6 recipes for Cheddar in our recipe section.