Paprenjak is a semi-hard cow's milk cheese from Croatia made with Red Pepper. It is made on the island of Pag in the Adriatic sea. 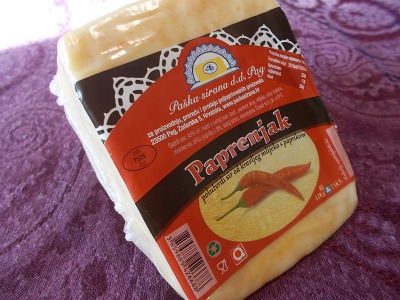 Though Paška Sirana, the maker of Paprenjak, claims on their blog that Americans are in love with Pag Cheese, I'll have to admin I never heard of it until my friend Krista brought me back some from a recent trip to Croatia.

Not knowing anything about Croatia, or the Croatian language, or Croatian food, I assumed that Paprenjak must be the Croation translation of Pepper Jack. However, a quick Google search informs me that Paprenjak is the name of a peppery cookie that is eaten in Croatia.

I didn't know that, of course, before I decided to compare Paprenjak to Pepper Jack. But as Pepper Jack is one of my favorite cheeses, I didn't mind an excuse to buy some. 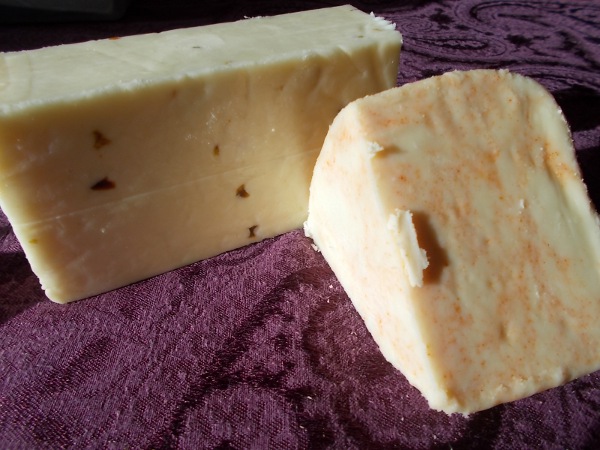 (In the photo, Pepper Jack is to the left and behind, and Paprenjak is in front and to the right.)

The first thing I noticed about Paprenjak when I opened it was that it was messy. It appears to be a rindless cheeese, with tiny indentations on the outside that would make it appear to have been wrapped in cloth at some point. It's only the outside of the cheese that is messy and crumbly, however.

Compared to Pepper Jack, Paprenjak is slightly firmer. It has somewhat of an acidic, citrus aroma, but that aroma is not strong at all.

The pepper flakes in Pepper Jack are bigger and more spread out than the tiny particles of pepper that are throughout Paprenjak.

Paprenjak is a stronger tasting cheese, but less spicy than Pepper Jack. This surprised me. Looking at the hot peppers on the package of Paprenjak had me looking forward to a spicy cheese.

Pepper Jack is a mild cheese (Monterey Jack) with hot peppers in it. Paprenjak is a stronger cheese than the average American is used to, but is not nearly as spicy as Pepper Jack.

I've never seen Paprenjak hear in the United States. The strategy that works best for me in obtaining Paprenjak is to make friends with someone who later takes a trip to Croatia and comes home and surprises you with a wedge of Croatian cheese.

If you know of a more efficient way of finding the cheese, please let us know. My friend Krista probably won't be going back for at least a couple more years.

This post made me laugh. Great entry. I'm supposed to be going back in Spring or Summer so if you (or anyone) want cheese, let me know! The J in Paprenjak surprisingly sounds like a Y so it's pronounced Pah-pren-yak. =)

Looks like the same company makes some sheep milk cheeses. You'll have to bring me some of those next time.