Monterey Jack is semi-hard cow's milk cheese from California in the United States. Monterey Jack is usually white in color, has a high moisture content (but not more than 44% by USDA standards), and melts well. In taste it is usually mild, a little buttery, with a slight tanginess. Because of its mild flavor (and its history) it is used often in Mexican food and in Spanish-inspired California cuisine.

Monterey Jack has lower levels of tyramine, a compound in many cheeses that is associated with headaches, than most cheeses. This makes Monterey Jack a good cheese choice for migraine sufferers.

There are many theories of the invention of Monterey Jack. Perhaps the most likely is that the cheese was first made by Mexican Franciscan friars in Monterey, California, in the 17 and 1800's. This was before California was a part of the United States, and was still a part of Mexico. These Spanish friars would have brought cheese knowledge with them from Spain. Their cheese was called Queso de Pais.

Some historians believe that Monterey Jack is a descendant of the semi-hard Italian cheeses made by the ancient Romans. The Mexican friars learned their cheesemaking in Spain, and their ancestors in turn learned from the ancient Romans.

A businessman in the 1800's named David Jack started to market the cheese, calling it Jack's cheese. He sold his cheese to grocers in San Francisco, who in turn called it Jack's Monterey cheese or Monterey Jack's. Eventually the cheese became known as Monterey Jack.

David Jack was the first to market it successfully.

Pepper Jack is made by adding small pieces of spicy peppers to the cheese curd during production. It is sometimes called Jalepeño Jack.

Sonoma Jack is made from Sonoma County, California, about 190 miles north of Monterey.

Some artisanal and small-scale cheese makers call their cheese Sonoma Jack or California Jack to distinguish it from the mass-produced Monterey Jack found in normal grocery stores.

An aged version called Dry Jack is used for grating, similar to Parmesan. Dry Jack is aged at least 7 -10 months. The longer it is aged the more of a deep golden yellow color it develops. It's flavor is comparable to a well-aged cheddar.

Depending on which historian you want to believe, Dry Jack was invented during World War II because hard Italian grating cheeses were difficult to obtain due to an embargo against Italy. Another version of the story has Dry Jack being discovered accidentally during the First World War by a cheese wholesaler from San Francisco named D. F. DeBernardi, who left some oversupply of Monterey Jack in storage too long.

The U.S. Department of Agriculture has published Standards for Grades of Monterey Cheese. (Kind of a boring read, actually, unless you are a cheesemaker.) 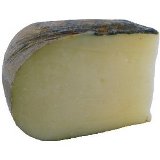 You can buy several varieties of Monterey Jack online at amazon.com. They even have an Australian version named Aussie Jack.

If you are looking for the rare treat Dry Jack (pictured to the right), the following sites have Dry Jack.

My name is Kristen Carlson. I am the Great Great Grandaughter of Dona Boranda. I was raised by my grandfather, her grandson who lived with her and his Mother Charlotte Espinosa. I am so proud to have such a strong tie to California's rich herritage. Last year I had a little girl who I named her Brianna Lilly Charlotte in honor of my grandfather and his mother. I hope she will feel the pride that I do when I think of my ancestors and the role they took part in shaping Californias History.