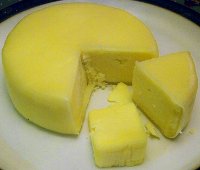 Swaledale is made in cylindrical shape, weighing an average of about 5 pounds. The cheese has either a natural rind or is encased in a wax rind. Cheeses with natural rinds develop a white-gray mold on the rind. Waxed cheeses are somewhat more moist than Swaledale cheese with a natural rind, since the wax holds in the moisture. The interior of the cheese is a creamy, off-white color with a moist, open texture.

Swaledale is aged about 3 to 4 weeks. Waxed varieties are encased in wax when the cheese is 3 days old. Aged longer, the cheese becomes drier and the taste becomes stronger. Swaledale is made with vegetarian rennet.

Cheesemaking came to the Swaledale area after the Norman conquest of England in 1066. Cistercian monks from France settled the area, bringing their cheese making skills with them. The cheese they made was a blue cheese made from sheeps milk, similar to Roquefort. These monks also taught local farmers how to make cheese.

By the early 1900's, more and more cheeses were being made in creameries, and fewer and fewer cheeses were being made on the farm. After the rationing programs of World War I and World War II (see article on Government Cheddar), farm made cheeses became even more rare in the Swaledale area. By 1980, only one farm in Swalesdale, owned by a Mr. and Mrs. Longstaff, made traditional Swaledale cheese. Mr. Longstaff died in the early 80's, and Mrs. Longstaff sold off her interest in the farm and ceased cheesemaking.

Swaledale Cheese and Swaledale Ewe's Cheese received PDO status in 1995, protecting the name of the cheese. To be labeled as Swaledale cheese, the cheese must be made in Swaledale, using local milk, and following certain procedures.

You can learn more about Swaledale Cheese at swaledale.co.uk. More information on PDO regulations can be found at www.defra.gov.uk.

We haven't found Swaledale in the United States yet, so you may have to go to England to enjoy this cheese. We found one online vendor that will ship to UK addresses.