San Joaquin Gold is a cow's milk cheese made by Fiscalini Farms in Modesto, Californio, in the United States. It is named after the San Joaquin Valley in central California. It is a relatively recent cheese, but has already won numerous awards, including gold medals at the World Cheese Awards in London in 2004 and 2005.

The cheese is a pale yellow that darkens to a golden color as it ages. San Joaquin Gold has a thin, natural rind, that has the shape of a cow stamped on top. The cheese is made in 32 pound wheels.

The cheese was an attempt at making a cheese like Italian Fontina. San Joaquin Gold has a harder texture and is saltier, making it a cheese of its own. The texture is firm and granular. It has been described a a cross between Cheddar and Parmigiano-Reggiano. It has a sweet, salty, buttery taste that becomes nuttier as it ages. The cheese is very flavorful, but still mellow. It is at its peak at about 16 months. 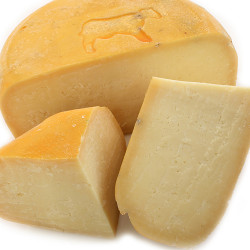 Fiscalini Farms uses unpasteurized milk from their own Holstein cattle to make the cheese.

San Joaquin Gold is a very versatile cheese. It grates well and melts easily. It is good for snacking, as a table cheese, or for a topping for soups or salads.

San Joaquin Gold is found around the country, but is easier to find in California. You can also find it online at amazon.com and at Fiscalini's web site.

My dad makes that cheese :)

This is an AMAZING cheese. the only thing that comes close to the taste and texture of Comte, the French Gruyere.