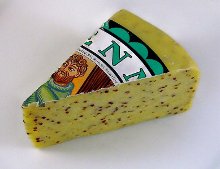 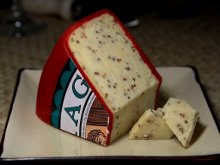 Red Dragon is a Cheddar-type cheese from Wales made with brown ale and mustard seeds. It is sometimes also called Y-Fenni. Red Dragon is a relatively new cheese.

Red Dragon is moist yet firm. It is made from pasteurized cow milk and vegetable rennet and is aged for 3 months. It is made in cylinder shaped forms of about 3 lbs. The mustard seeds add both to the texture and the taste of the cheese. The taste has been described as buttery and spicy, but not too spicy. Some have compared it to the taste of sharp cheddar.

Besides eating it by itself, Red Dragon is good on burgers, grilled cheese sandwiches, and other dishes. Red Dragon melts well. 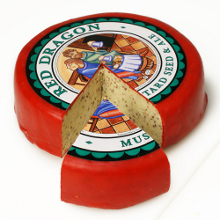 Because of its interesting taste and appearance, Red Dragon is becoming easier to find. However, if you can't find it in a local cheese shop or grocery store, you can order it online at amazon.com

love your cheese - great with beer or margaritas!! wish trader joes carried it all year - please!!

Just picked this cheese up on a whim at Fiddlehead Farms in NH. It is fantastic! Even my fiance, not a cheese eater, LOVED it. It has a really nice sharpness and the mustard seeds add to the texture as well as the flavor. I highly recommend this!

I saw a recipe for a grilled cheese sandwich on Yahoo yesterday...using Red Dragon cheddar...but can't find it today.

Tried this for the first time, today, from S. Clyde Weaver in Lancaster, Pennsylvania. Excellent cheese. I had it chilled and room temperature. I prefer it room temperature, as I do most cheeses. It's a grainy cheese, surprisingly mild with that awesome kick of mustard seed. I would like to try this in cooking.

Thanks for sharing, Elizabeth! I haven't tried Red Dragon in a few years. I think I'll hunt some down soon.

I love this cheese but I don't want to order it from Amazon. I live in Clayton County and need to see if a store has it close to me.

Is there another cheese that is similar to red dragon cheese. I saw a chipole gouda cheese that looks like it so what.