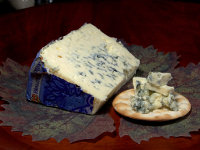 Bleu D'Auvergne is a French Blue Cheese from the Auvergne region in south central France. It is cow's milk cheese, made from either pasteurized or raw milk and is uncooked and unpressed. Though like most blue cheeses it has a strong smell and taste, though it is generally more mild than Roquefort.

The cheese has a moist sticky rind with a white or ivory interior with blue veins throughout. The interior is soft. The taste becomes stronger and spicier as the cheese ages.

Bleu D'Auvergne is aged at least 4 weeks. Before it is aged the cheese is pierced with needles to promote mold growth in the interior. Penicillium roqueforti or Penicillium glaucum is used. Cheeses with P. glaucum are milder than cheeses with P. roqueforti.

The cheese is packaged in foil

Bleu D'Auvergne is a relatively recent cheese. It was developed by a dairyman named Antoine Roussel in the 1850's. He noticed that some of the cheeses he made had mold on them, and he liked the flavor of these cheeses. He experimented with different methods of getting mold in the cheese, and discovered that if you pierced the cheeses with needles that air was able to get in the cheese to promote mold growth. Roussel used the mold from rye bread. Other nearby cheesemakers copied his methods.

Bleu D'Auvergne received AOC status in France in 1975. This means for the cheese to labeled as Bleu D'Auvergne it has to be made in a specific geographic area in France with specific ingredients and following specific methods.

You can find Bleu D'Auvergne at amazon.com and at Murray's Cheese shop.