When we saw the news report that Beaver Classic cheese was available in Oregon we were pretty excited. But since the cheese is neither made from beaver milk, nor has it been around long enough be a classic (yet), our excitement diminished, if only slightly.

Beaver Classic is a cow milk cheese made in Alpine style of mountain cheeses from Switzerland, Italy, and France. Similar to cheeses like Gruyère or Comté, Beaver Classic is somewhat dry, and has a taste that has been described as "subtle, nutty flavor with creamy, buttery and caramelized notes." The cheese is aged six months. 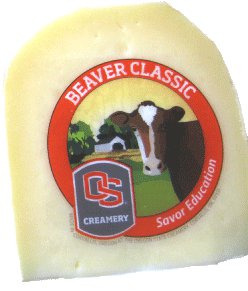 Beaver Classic became available commercially in the fall of 2012. In 2012 the school made about 1,000 pounds of cheese. They hope to make ten times that the following year.

Beaver Classic is available online at the university's website or on campus at Oregon State University.

When will the Oregon 'Ducks' start making cheese?