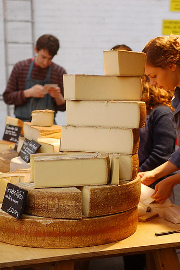 Gruyère is a hard cows milk cheese from Switzerland, named after the town of Gruyères in that country. It has a sweet, slightly salty taste that changes much depending on the age of the cheese. The French cheeses Comté and Beaufort are similar cheeses, and some French cheeses were called Gruyère before it received PDO status in 2001.

Gruyère is aged 5 - 12 months. Younger Gruyère is gritty and nutty. It's taste becomes more earthy and complex as it ages. Gruyère is a good cheese for baking because its taste is distinct but not overpowering, and it is often used in Quiche. Gruyère is also a good melting cheese for fondues.

Swiss Gruyère cheese does not usually have holes, but French cheese related to Gruyère often do. There is also an American version made in Wisconsin.

Gruyère has been around since at least the 16th century, and perhaps as early as 12th century. The cheese was not known as Gruyère until the 18th century. The name became part of French dictionary in 1762.

There is much more information about the history and production of Gruyère at this website. 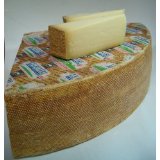 You can find Gruyère at amazon.com.

We have 3 recipes for Gruyère in our recipe section.