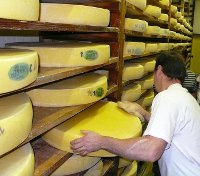 Comté is a firm, unpasteurized cow's milk cheese from the mountainous Franche-Comté region in eastern France. Sometimes also called Gruyère de Comté, this cheese has been made since at least the 1200's and was one of the first cheeses in France to receive AOC protection status.

The taste can vary depending on the age of the cheese and where it was produced. Usually it is described as having a nutty, fruity taste. Comté is usually a mild cheese, but can be sharper in older cheeses. The cheese wheels are quite large, weighing up to 110 pounds (50 kg). They are 16 to 28 inches (40 to 70 cm) in diameter and about 4 inches (10 cm) high. The rind is light brown and the interior is a pale, creamy yellow.

Comté received AOC protection status in 1958. This means that to be labeled as Comté the cheese must be made in a certain geographical area and follow certain procedures. For example, only milk from the Montbeliarde breed of cattle can be used, and the cows must be fed fresh, natural feed. Other procedures are listed in the Wikipedia article on Comté.

You can read more about Comté at the website for the Comité Interprofessionnel du Gruyère de Comté.

We also found a photo gallery of how to cut Comté. The photo gallery also gives you some sense in how big a wheel of Comté cheese is. 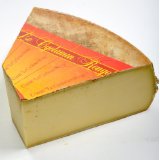 We found Comté online at amazon.com. They have it available in many sizes, including a whole wheel of Comté for only $1722.10 for the good stuff.