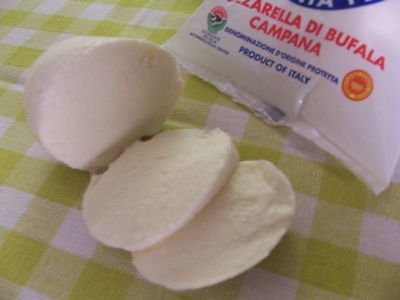 I wanted to know if it was really better, or if cheese snobs just say it's better. I had to wait a few months, though. Nugget Market here in Sacramento carries it, but they only sell it in the summer.

Then Saturday came. My cell phone rang. I'd completely forgotten that when I asked about Mozzarella di Bufala three months ago they asked for my phone number to let me know when it came in. I was excited, but had to wait until Monday until I had a chance to go to the store and buy some. I bought some Mozzarella di Bufala, imported from Italy, and some cow milk Mozzarella, made in Wisconsin, packed in water.

Less than a couple hours later, it was all gone.

So, what's the difference between the two? 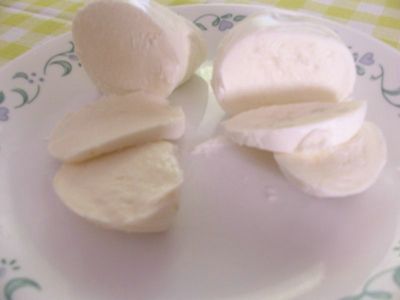 In the photo I have Mozzarella from cow milk on the left, and Mozzarella di Bufala on the right. Before I did the review I was worried I'd have problems telling them apart, but there are differences. Physically speaking, the cheese made from water buffalo milk was a brighter white, softer, less firm, and more moist. It was easier to tear apart the Mozzarella di Bufala than the cow milk variety. Squeezed lightly between the fingertips, Mozzarella di Bufala felt a little spongy compared to the other kind.

In terms of taste, the Mozzarella di Bufala had a stronger (but not too strong), tangier, almost (but not quite) sour taste to it. It was tangy, yet smooth, if that makes any sense. Cow milk Mozzarella by comparison was much sweeter and milder.

I had all three of my kids and my wife taste the cheese, without telling them which one was which. I like asking my kids because kids don't know which one is supposed to taste better. All four of them liked the cow milk Mozzarella best, when served by itself. My oldest son suggested maybe because it's the one we are used to. 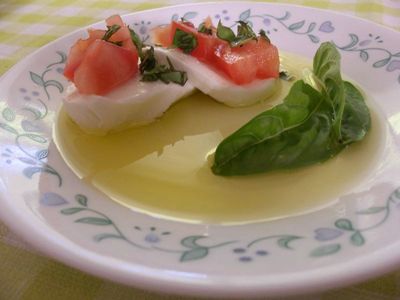 Can't say I'm a big fan of Mozzarella with pepper. It's okay, but no wow factor. The cow milk again did better served that way than the buffalo milk.

That surprised me a little. I have tomatoes, basil, and cow milk Mozzarella several times a year, and I would never had said that the cheese tries to compete with the basil and tomato if I hadn't tried it side-by-side with buffalo Mozzarella.

Overall, I love both cheeses, and would recommend either one, especially over the low-moisture Mozzarella that you find in almost every grocery store. We liked the cow milk better by itself, but I wonder if I would have had a different opinion had the Mozzarella di Bufala been as fresh as the stuff you buy in Italy. (It's pretty close to impossible to get hours-old cheese from Italy here in California.)

The Mozzarella di Bufala is more expensive, but worth buying even if it's just so you can brag to all your friends that you have a ball of buffalo milk Mozzarella in your fridge.

And I’m looking for mozzarella fresh good quality do you have any distributors for your brand (BUFFALO)in my country (Lebanon)?

Dear Rana,
Are you still looking for buffalo mozzarella?

We are an italian company, we can provide this product and other Italian food

where can I get information on a breeding pair of Water buffalo in northern California?
Thank you
Leonardo

We are looking to source mozzarella di bufala and tomatoes for our sauce for a few authentic neapolitan style pizza restaurants in the states. Canm you please send me some info on your products and contact info?

Dear Rana,
The good news is that buffalo mozzarella is now being freshly produced in Lebanon under the brand name of Green Bufala Hills, and is available in big supermarkets. It's freshly prepared from Italian water buffalo milk in Lebanon, where our buffalo farm is. Contact us for more information, and we are pleased to collaborate.

At itscheese.com we don\'t sell cheese; we write about cheese. You may want to write to info@mozzarelladibufala.org, the organization that promotes Mozzarella di Bufala in Italy. They may be able to help you with a supplier in Lebanon.

THANKS FOR THE GOOD EXPLANATION

I TEACH ITALIAN (AS WELL AS OTHER LANGUAGES) AND I AM BASED IN MELBOURNE WHERE THERE IS AN ITALIAN QUARTIERE AND YES, WE ARE VERY FORTUNATE TO FIND MOST PRODUCTS FROM AROUND THE WORLD. WILL EXPLAIN ALL TO MY STUDENTS AS I LOVE THEM TO KNOW ABOUT ITALIAN CULTURE..WHICH INCLUDES CUISINE, THE ARTS AND MORE. SURELY WE\'LL BE ABLE TO GET BUFFALLO MOZZARELLA...SOUNDS GREAT . GRAZIE TANTE. ARRIVEDERCI.

Paestum Italy is considered the bufala mozzerella capital of the world. I was there 4 years ago and ordered a ball for our table at lunch. When I cut into it cream ozzed out and it tasted wonderful. Even the bufala mozzerella in Roma couldn't compare. It has to be fresh to taste like this. The stuff they sell in the USA is not even close, it can't be.

Burrata is mozzarella made into a ball then filled with cream. But it is considered a separate product / cheese than mozzarella.

Burrata has to be consumed very fresh, within a day or so.

Hi, late response but thanks for the comparison. I tried this myself recently and wanted to suggest another test. Put a thin slice of bufala mozzarella on a thin piece of bread and melt it under the broiler. You can top with extra virgin olive oil. It really opens up the creamy flavors and aromas of the cheese that aren't there when eaten in non-melted state. Also, the thin slices were better than thick....

I'm not surprised the kids liked it better, because it's what they're used to, as your older child said. My husband and I went to Italy in 2010 and had Mozzarella di Bufala for the first time. I can't forget how much I loved it. Last year we went to a restaurant and I ordered a sandwich. The minute I bit into it I could tell the cheese was Mozzarella di Bufala. It's very hard to find where I live. In fact, I have never found a store that sells it here. Melted in a panini, with fresh tomatoes and basil or arugula, it can't be beat!

In the Hudson Valley, and downstate, you can get Mozzarella di Bufala at DeCicco's Family Markets...the one in Carmel is superior to any Wegman's, Fresh Market or other top-end store...plus the prices are VERY competetive with Shoprite and Price Chopper. They have 11 locations, having just opened up in Cornwall. www.deciccos.com

What about on pizza?

I just wanted to add that for people who are lactose intolerant, buffalo mozarella can be easier to tolerate. And yes, it's excellent on pizza. Try making a pizza yourself with buffalo mozarella. Can't be beat. All the best from England.

I spent the summer in Italy and was fortune enough to stumble upon the Tenuta Vannula Diary farm in Capaccio. It was such an education into buffalo farming. I wished my Italian was better as I had so many questions. They sell out of all their fresh mozzarella and ricotta every day by noon. People drive from as far as Naples to purchase. I have included a link to an article that appeared in South China News recently talking about the farm. Should you ever find yourself on the Amalfi Coast, head south and find this place, you won\'t be disappointed! http://www.scmp.com/lifestyle/food-wine/article/1322731/vip-buffalo-treatment-jazz-and-massages-produce-premium

I am looking for water buffalo fat to bay, obout 2-3 lb. \ncan you please tell me wher can i get it.\nThan you.\nJackli

to europeans who wish to visit Philippines (Boracay, Malay, Aklan). wish to inform you that by 2015,we will be supplying Italian Buffalo Milk products..\n\nyou may contact the Municipal Agriculturist of Malay, Aklan, Philippines and Mr. Arn D. Granada cel # 09999916115

Does anyone know where you can get Buffalo mozzarella in Adelaide, South Australia?
Thanks
Jazzmina

Can you tell me if buffalo mozzarella is heLthier than the cows and if it is lower in collestral?

Go to Italy and try buffalo mozz there. Trust me, it's worlds above cow mozz. You can't describe the difference, you have to experience it.

I totally agree with you Matt! Visited Italy last year, nothing like having it in Italy nice and fresh. Now when we go out and order Caprese salad I asked if they use Buffalo mozz

You and Matt are so right! You need to taste the di buffalo mozarella in the Paesum area but n italy. Absolutely different than wart you get in rome or Venice. Or the US. Something about the soil or swamps there but you can't compare it to anything else. I think the US requires it to be pasteurized which changes the texture and taste.

In Italy you need to eat it within 3 days.

Hi Lois. To my knowledge no cheese is made from the milk of American Bison.

Dang! They only sell cow mozzarella here! I want to have real stuff! Cow mozarella is so untasty!

My dear friend Audrey Hitchcock is currently producing mozzarella here in Northern California. Visit her website Ramini Mozzarella, perhaps she will see you some. She is in Tomales California and currently has 49 buffalo.

I find store bought mozzarella, either fresh or packaged, to be tasteless...and in dire need of salt for flavor!! Mozzarella I've had in NYS compared to upstate NY where I live is miles apart in flavor.
What brand would you recommend??