In the United States, the term String Cheese usually refers to low-moisture Mozzarella cheese that is formed into small log shapes. The cheese can be peeled (just like normal Mozzarella) into strips, or strings. The cheese is generally marketed as snacks for kids. Sometimes coloring is added to make the cheese a similar color as mass-produced Cheddar, and sometimes the same stick of string cheese will be half white cheese and half colored cheese.

Some eastern European countries (Armenia and Slovakia, for example) have their own versions of String Cheese. Often these contain spices mixed in with the cheese. 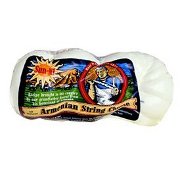 The American version of String Cheese can be found in most grocery stores in the United States, and can also be purchased online at places like amazon.com.