Sardo is a semi-hard to hard cow's milk cheese from Argentina. It is an Italian style grating cheese, but should not be confused with Pecorino Sardo (also called Fiore Sardo) which is a sheep milk cheese from Italy. Sardo is sometimes called Argentine Sardo or Sardo Argentino to distinguish itself from the Italian cheese.

Sardo is light yellow in color, and formed into wheels that are about 6 lbs. in weight. The flavor is rich, but sill mellow, and somewhat salty. It is used both as a snacking cheese in cooking. It goes well on top of pasta, in soups, or with steamed vegetables. 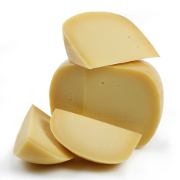 Sardo can be purchased online at amazon.com.

want sardo ..amazon has none

That's frustrating. The best I could find was Sardo in this assortment of grating cheeses. Let me know if you find it elsewhere.