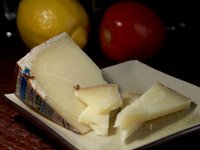 The Dolce variety is young and soft. It is matured for about 20 to 60 days. It is sweeter than the older version. It is labeled with a green emblem on its packaging to distinguish it from the Maturo version.

The Maturo variety is aged for about 4 to 12 months. It is tangy and a little crumbly. Pecorino Sardo Maturo is labeled with a blue label.

You can find Pecorino Sardo online at amazon.com.

I would like to purchase a wheel of Sardo dolce pecorino cheese. I live in Canada. How do I order the cheese?

Hey Gianni Cossa I have a seller on ebay that ships from sardinia. They ship all over the world. Authentic pecorino cheese. Very nice people and keep great contact. The item # is n261077749412. You can find other cheeses on their page by clicking formaggi in their store. You will not be disappointed I'm telling ya.

Hello Daniel. Could you tell me how to contact him? Thank you.