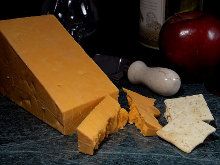 The cheese is orange in color, due to the vegetable colorant annatto being added to the cheese during production. The rind is reddish orange, and may have some powdery mold on it. Red Leicester is usually aged 4 to 9 months. Older versions of the cheese have a stronger flavor and drier texture than younger versions. 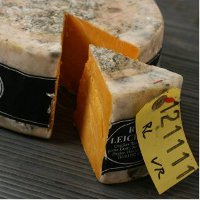 You can read more about this cheese at the British Cheese Board's Red Leicester page. We also recommend visiting the site of the Leicestershire Handmade Cheese Co, who actually make the cheese in Leicestershire under the brand name of Sparkenhoe.

In the United States Red Leicester is not very easy to find. Kerrygold (an Irish brand) exports to the U.S. and you may find that brand in high-end grocery stores. You may also find Sparkenhoe Red Leicester exported from Neal's Yard Dairy, if you live near a shop that carries their cheese.

I have (casually looking) never found red leicester in the states. Why is it not very easy to find?

it's mainly an English cheese, harder to find out the uk