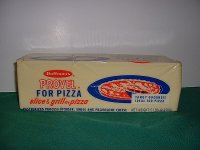 Provel is a white, processed cheese made from Cheddar, Swiss, and Provolone cheeses. It is common in St. Louis, Missouri, in the United States, but is almost unknown in most of the world. It is used on St. Louis style pizzas, and is also used on salads, sandwiches, and chicken.

Provel is soft at room temperature and has a low melting point. It is used on St. Louis style pizzas instead of Mozzarella because it has a "clean bite". This means that it is not stringy, like most pizza cheeses.

Because of Provel's moisture content, it cannot be labeled as cheese in the U.S. Instead it is labeled as "process cheese". Even though it is processed cheese, it is closer to being a real cheese than most cheeses labeled as American Cheese.

Below is a 6 minute video we found on YouTube about St. Louis style pizza. The first half talks about Provel cheese.

Provel may be difficult to find outside of the St. Louis area. We found it online at amazon.com.

THANKS for this site, and the video. I was searching online for info on Provel cheese today and was pleased to find this site. We had pizza when in St. Louis and LOVED the cheese...but came back to Nebraska to find we can't get it here. :(

We both grew up in St.Louis---One of us in the Italian area known as "THE HILL". So we are veteran Hill shoppers. Even though we have lived out of Missouri the past 42 years we continue to shop there every time we get back to the home ground and on-line from our favorite shopping haunts on the HILL when back here in Washington.........Go to Viviano's website to satisfy your Provel fix. We have shopped there since we were kids. Viviano's and Volpi's have always been our 2 mainstays for Italian food products.

Where can I purchase Provel Cheese in Kansas City / Independence, MO

I found it online here
https://shop.imospizza.com/category-s/1847.htm