Maytag Blue is a Blue Cheese from the United States. Unlike most blue cheeses, Maytag Blue is made from cow's milk instead of sheep's milk.

The first wheels of Maytag Blue where made on October 11, 1941. It was developed by Clarence Lane and Bernard W. Hammer at Iowa State University to produce a blue cheese similar in quality to European blue cheeses such as Roquefort. Previous attempts in America to produce quality blue cheeses so far had been unsuccessful. The cheeses did not have uniform mold growth, lacked consitent quality, and were too dark.

The owners of the Maytag Dairy were the same family that owned the Maytag appliance company. They learned the method for creating blue cheeses at the university and decided to create blue cheese the same way using milk from their herd of Holstein cattle.

Maytag Blue is made from milk that is homogenized, but not pasteurized. It is aged about six months in caves in Newton, Iowa. It is a pale white cheese with blue veins of mold throughout. It is soft and crumbly, and spreadable. It has a strong, sharp taste from the Penicilium roqueforti mold and a strong smell characteristic of blue cheeses. The taste is also somewhat salty and has a lemony finish. The handmade cheeses are sold in a foil wrapper.

The cheese is made in 4-pound wheels. The wheels are pierced with needles to promote mold growth.

Maytag Blue is probably the most successful of blue cheeses created in America, with about one million pounds a year being made. 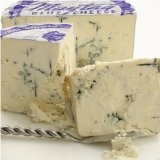 Maytag Blue is available on amazon.com as well as direct from the Maytag Dairy website.

We have 17 recipes for Maytag Blue in our recipe section.