Majorero is a firm, pressed, uncooked goat's milk cheese from the island of Fuerteventura in the Canary Islands of Spain. The unpasteurized milk comes from the Majorera breed of goat. Majorero cheese has a texture similar to Manchego. The cheese has a milky, nutty flavor that may be slightly spicy or tart. Older versions have a stronger, fuller flavor. The cheeses are made in large, cylinder shaped wheels weighing around 6 to 15 lbs.

The rind is white on the mild version, but is yellow to brown on the more-aged versions. The older versions of the cheese may be rubbed with oil, paprika, or roasted cornmeal, which makes the rind darker and adds to the flavor of the cheese. The rind of the cheese also has a palm leaf pattern from the cheese mold, which traditionally comes from when these cheeses used to be wrapped in palm leaves.

Majorero has had PDO status in Europe since 1996, which means for the cheese to be labeled as Majorero it must meet certain criteria. The cheese can only be made on the island of Fuerteventura from goats milk. 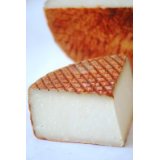 You can find Majorero cheese online at amazon.com