Jarlsberg (pronounced YAHRLZ-berg) is a mild, cow's milk cheese from Norway. It is based on an Emmental-like cheese that was made briefly in the county of Jarlsberg, Norway by Swiss cheesemakers in the early 1800's.

Development of Jarlsberg cheese started in 1956 by a man named Ola Martin Ystgaard from the Agricultural University of Norway. The Emmental-like cheese made from the 1800's was no longer made and Ystgaard did research to produce a similar cheese. Jarlsberg cheese was ready for export by 1961.

Jarlsberg is usually aged 2 to 3 months, but there is a version of the cheese called Jarlsberg Reserve that is made in limited quantities and aged at least 12 months. Jarlsberg Reserve has a stronger and more complex flavor and aroma.

There is also a smoked version of the cheese, though the smoked version wouldn't exactly fit everyone's definition of a smoked cheese. According to TINE, a major manufacturer of Jarlsberg, smoked Jarlsberg is produced by dipping the cheese "in a special smoky liquid."

There is a group on Facebook for fans of Jarlsberg cheese. 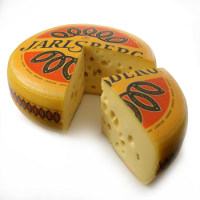 Jarlsberg is a very heavily exported cheese, and can be found in many grocery stores throughout the world. You can also find Jarlsberg online at amazon.com