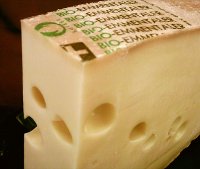 Emmental (also called Emmentaler or Emmenthaler) is a cheese from Switzerland with a creamy, nutty flavor and famous large holes throughout the cheese. There is a similar cheese called Swiss Cheese made in North America and other countries.

Emmental is a medium hard cheese that is a pale yellow in color. It is named after the Emme Valley in the canton of Bern in Switzerland. It is usually aged about 4 months. Traditionally it is made from raw cow's milk in large wheels that can weigh more than 150 pounds (over 70kg). Though unpasteurized milk is typically used in Switzerland, many other countries use pasturized milk.

Emmental has been made since at least the 13th century. It is probably Switzerland's most well-known cheese.

The name Emmental is not protected, and so Emmental cheese is produced in several countries. Even though the cheese originated in Switzerland, most Emmental is made in France. There are name-protected varieties, however. For example, to be labeled "Emmentaler Swiss" the cheese by law must be made in the Emmental valley area of Switzerland from raw milk and follow other certain procedures. France, Austria, and Germany also have PDO (Protected Designation of Origin) versions of Emmental.

Emmental melts easily, and is found in many dishes including fondue, quiche and other baked dishes, cheeseburgers, and sandwiches.

Three different types of bacteria are important in the production of Emmental Cheese (and similar holey cheeses). Streptococcus thermophilus and Lactobacillus bacteria change the lactose in milk into lactic acid. Propionibacter shermani digests this lactic acid and creates carbon dioxide. Over time the carbon dioxide produced by p. shermani created bubbles that form the holes in the cheese. The size of the holes is determined by the temperature, acidity, and maturation time during production.

A group of Emmental producers from Switzerland have a website about their name-protected version of Emmental. 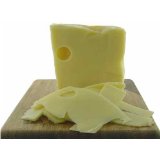 Emmental is a highly exported cheese, so finding some shouldn't be too difficult in high-quality grocery stores or in cheese shops. Find out where it comes from, because Emmental is made in several different places. (Just because it doesn't come from Switzerland, however, doesn't mean it's not worth eating.)

You can also find Emmental at amazon.com

We have 1 recipe for Emmental in our recipe section.