Gloucester is the name of two cow's milk cheeses that have been made in Gloucestershire, England since the 16th century.

Double Gloucester is made from whole milk. It is typically aged longer than Single Gloucester and has a stronger flavor.

For at least 200 years in Gloucestershire at a place called Cooper's Hill people have rolled wheels of Double Gloucester down a steep hill and chased after it. The first person across the finish line gets to keep the wheel of cheese. The hill is steep and every year many people are injured chasing after the cheese.

You can read more at www.cheese-rolling.co.uk/ and www.bbc.co.uk/gloucestershire/our_crazy_county/cheese_rolling/. You can also search on YouTube for "cheese rolling." Below is a video of the 2008 event. 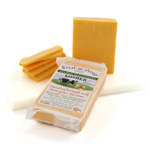 Double Gloucester can be found in many cheese shops and high-end grocery stores. We have yet to find Single Gloucester here in California (but we haven't looked too hard, yet).