Cashel Blue is Ireland's first blue cheese. Made from the pasteurized milk of Friesian cows, the cheese was developed in 1984 by Jane Grubb of County Tipperary, Ireland. As of the summer of 2011, it has been sold in the United States under the Kerrygold brand. 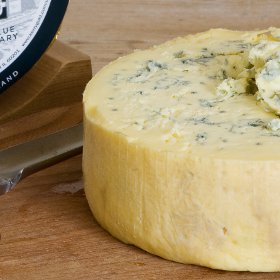 Cashel Blue can be aged up to 6 months. Young, it has a white paste with a sweet, tangy, and slightly acidic flavor. As the cheese ages, the flavor becomes more robust, rounded, earthy, and creamy. The color becomes a buttery yellow. Blue green veins of Penicillium roqueforti penetrate throughout the cheese.

The cheeses are made into small cylinders of about 3 to 4 pounds in weight and are wrapped in gold-colored foil. On the exterior of the cheese a thin, edible rind develops. The cheese is made with vegetarian rennet. 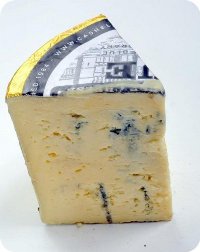 Cashel Blue is named after the Rock of Cashel, a medieval castle where, legend has it, St. Patrick began converting the pagans of Ireland to Christianity. A sketch of the castle is on the packaging.

Cashel Blue goes well with pears, figs, on crakers or bread, It also goes well on grilled steak or on salads. Our recipe section has several recipes using Cashel Blue.

Though becoming increasingly popular, Cashel Blue is still a little hard to find in U.S. grocery stores. You can find it online at amazon.com.

We have 14 recipes for Cashel Blue in our recipe section.