Caerphilly is a white, crumbly cheese named after the town of Caerphilly, Wales. It is similar to Cheshire, young Lancashire, and Wensleydale. 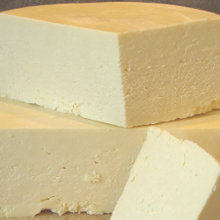 Caerphilly was invented in Wales sometime around 1830. It was popular with Welsh Coal miners. The salt in the cheese replaced the salt lost to sweat while they worked, and the cheeses rind allowed them to eat the cheese with dirty fingers.

Caerphilly has a clean taste with a little bit of a tang. It is a young, moist cheese. Though originally made in Wales, it is now made both in Wales and England. The English version is younger, usually aged about 2 to 8 weeks while the Welsh version is traditionally aged 12 to 20 weeks.

Caerphilly can be found in some high-end grocery stores. In Sacramento, CA where we are headquartered we found it at Corti Brothers. It can also be found online at amazon.com and murrayscheese.com.