Beer Cheese is a semi-firm cow's milk cheese related to Limburger. It is salty and pungent. Beer Cheese is ripened 7 months in humid conditions.

Beer Cheese is originally from Bavaria, Germany. It is now available in many parts of the world. A version of the cheese is made in the United States, mostly in the state of Wisconsin. 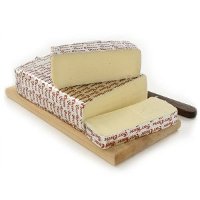 You can find Beer Cheese online at amazon.com