Limburger is a cheese famous for its strong smell. It is named after the historical duchy of Limburg, which is currently divided up between the modern nations of the Netherlands, Belgium and Germany. Most Limburger cheese is made in Germany.

Limburger is a wash rind cheese, which means that it is occasionally washed in a brine solution during the cheese's maturation. It is made from cow's milk. It has a pale yellow interior with a golden-colored rind, and sometimes has a few small holes in the interior. It is typically made in rectangular, brick shape. Young Limburger is firm, crumbly, and salty. As Limburger matures to about 3 months, it develops its famous odor. Limburger also becomes spreadable as it ages.

Limburger has a strong, buttery, meaty taste, though it isn't as strong as its odor.

Limburger has also been made in Wisconsin, in the United States, since 1867 when Rudolph Benkerts made some with pasteurized goats milk. Within a few years, several dairies were making Limburger, though today only one manufacturer of American Limburger remains in Wisconsin.

The bacteria that ripens Limberger, Brevibacterium Linens, is responsible for its smell. The exact same bacteria is found on the surface of human skin and is in part responsible for body odor. Many people describe Limberger as smelling like smelly feet.

Though Limburger has a strong, repulsive smell, there are people out there that enjoy the cheese. As of this writing, there are 91 fans of Limburger on Facebook and can be found in Wisconsin delis on Limburger sandwiches made on rye or pumpernickel bread, a slice of onion, and mustard.

Limburger occasionally shows up in popular culture, usually in a negative light. It is Mighty Mouse's only known weakness, for example. 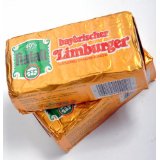 Due to its unpopularity, Limburger may be difficult to find in many parts of the world. In the United States, it can be found in Wisconsin and neighboring states, especially in places where there are large amounts of people of German descent.

You can find Limburger online at amazon.com