Arzua-Ulloa is a fresh cow's milk cheese from the Galicia region of Spain. It is similar to Tetilla, but has a different shape. (The cheese is in the typical wheel-shape common to many cheeses.) It is sometimes called Queso de Ulloa. 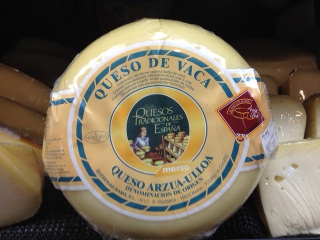 The cheese is described as lightly sweet, creamy, and with a hint of bitterness. The cheese can be made with pasteurized or unpasteurized cow's milk. The name Arzua-Ulloa is protected in Europe, and is only made in the provinces of La Coruña, Lugo, and Pontevedra.

There are three types of Arzua-Ulloa:

Arzua-Ulloa is the normal variety, made in creameries or factories.

Queso Arzua-Ulloa de Granja is the farm-made variety. To be labeled as such the producer must use milk from cows at the same facility the cheese is made.

Queso Arzua-Ulloa Curado is cheese that has been aged at least 6 months.

We haven't found any online sources that sell Ulloa cheese, but a few of our readers have found it locally in the United States. (See comments below.)

If you know of any place that sells Arzua-Ulloa cheese, please let us know. (Or leave a comment in the comments section below.)

I found ulloa cheese at Central Market in Austin TX. Last month the store had a promotion called "ESPANA!" which featured the food of Spain. The market brought over Spanish chefs, winemakers, and I attended a class on Spanish wine and cheese parings....we ate the ulloa with cava and marcona almonds. I am hooked.

Just got in two cases of Ulloa here at New Pi Co-op in Coralville, Iowa. Never had it before, pretty cool stuff.

Editor's note:Thank to Tom who was nice enough to take a picture of Ulloa cheese for us. The photo near the top of the page was taken by him.

Arzua Ulloa is available in New York City, right at the Grand Central Market, from a shop called: Murray's.