First, a disclaimer. In researching Abondance cheese, we found lots of conflicting information on the Internet. In compiling that information for this article we either chose what seemed most likely to be true, left it out because we couldn't tell, or (see section on 'Labeling' below) kept the conflicting information. This article, therefore, should not be taken as authoritative on the subject of Abondance cheese, even though we've tried to be as accurate as we could. 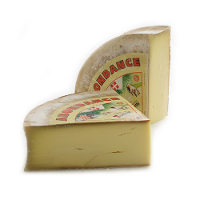 Abondance is a semi-hard, unpasteurized, cow milk cheese from the Haute-Savoie department of France, near the Swiss border. The cheese dates back to at least the 12th century, and was originally made by monks.

The wheel-shaped cheese has an amber color, inedible rind that retains the cloth marks from its production. The edge of the cheese is concave. The interior of the cheese is ivory or pale yellow in color, with occasional small holes. Abondance has a fragrant, nutty aroma. The flavor is distinct and complex, slightly acidic, with a lingering aftertaste. It is somewhat similar to Beaufort and Comté. The cheeses usually weigh between 15 to 26 pounds (7 to 12kg). The cheese is aged about 3 months.

The name Abondance has AOC status in France, since 1990. This means that for a cheese to labeled as Abondance it has to meet certain criteria, including where it was made, what breed of cattle the milk comes from, and what food the cattle eat.

There are (at least) 2 varieties of Abondance cheese. Abondance Fermier is a farm-made cheese, and Abondance Laiter is a creamery-made cheese.

We found Abondance cheese at amazon.com.

People seem to understand little about microbes, and adopt highly irrational eating behaviors in relation to their superficial knowledge.

Of course you can throw half of your cheese and feel disgusted however much you like but consider alternatives, especially considering the fact that surface bacteria and molds are probably not what causes sickness cases due to cheese.

I have not searched for statistics but the most common problem seem to be lactose intolerance, then perhaps migraine, and finally bacteria (mostly listeria it seems) contamination which most probably do not come at all from the rind.

The rind will grow only minute amounts of stuff, quite competitively, stuff that even OCD people are in contact with, even swallow, much more often that what may grow inside the paste of some cheeses.

Of course people will keep throwing the often delicious rinds of all their precious comté, gruyere, ossau-iraty, raclette, etc. and feel disgusted, even sick just thinking about it, or when discussing it with friends...

I would be extremely curious to know about sickness cases due to eating the rind -not counting just feeling sick for thinking about it. Please say it if you know any.

PS: I appreciate care taken with correctness of certain facts though. In relation to this european laws regarding abondance and many other cheeses are available in the DOOR database: http://ec.europa.eu/agriculture/quality/schemes/index_en.htm

Paul,
when people talk about edible and inedible rinds on aged cheeses like abundance and gruyere I think the issue comes more from a stand point of how enjoyable the rind is to eat. frankly I don't want to eat the rinds from gruyere, ossau-iraty, parmesan, etc because of the toughness and unpleasant mouthfeel not the microbes. I guess one man's trash is another's treasure.

Can you send me a recipe to make my own Abondance cheese. I have 2 cows and really want to try this delicious cheese. Thanks.
Sue

We recently bought some to try. When we opened the sealed plastic vacuum pack, the smell put us off so that we couldn't eat it.... assumed it was spoiled! It was also slightly sticky to touch. I don't think it should 'stink' or be sticky.

We have 1 recipe for Abondance in our recipe section.