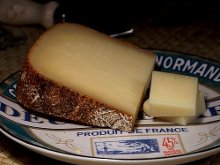 The cheese was originally made by monks at the abbey of Notre-Dame de Belloc, starting in the 1960's. The recipe is similar to another local cheese, Ossau Iraty. Milk was brought into the abbey from local farms. Now much of the cheese is made at local farms near the abbey.

Abbaye de Belloc is made in wheels that are about 10 lbs in size. The cheese has a thick hard rind that is inedible. The rind is brownish red in color, with some gray mold and often patches of orange and yellow showing through. The interior of the cheese is a smooth, dense, and ivory in color. 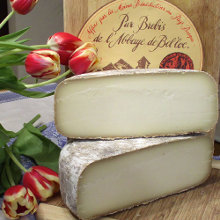 The cheese has a mild yet rich, sweet flavor, with caramel tones. This cheese is high in fat, at around 60% milk fat.

The cheese is aged between 4 and 10 months. Production starts in December and ends in July. Older wheels of Abbaye de Belloc are drier and have a stronger flavor. Cheeses made in December are ready for market by April. Cheeses made in July are kept longer, until about April or May of the following year.

The cheeses are not made year-round because the ewes that give the milk do not lactate the entire year.

Abbaye de Belloc is becoming more available in the United States, but still may be hard to find in many areas.

You can buy some online at amazon.com.

We have 1 recipe for Abbaye de Belloc in our recipe section.