I've wanted to try Wensleydale for quite some time. It was mentioned in the famous Monty Python Cheese Shop sketch, and is also mentioned a few times in Wallace and Gromit animations. It was a little difficult for me to track down here in northern California. I started looking for it in early August, found some aged Wensleydale, but didn't find what I was really looking for until the middle of September. I'm glad I kept looking, because now Wensleydale is one of my favorites. 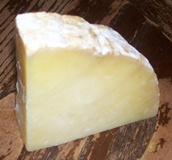 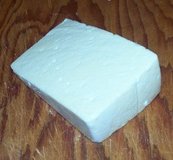 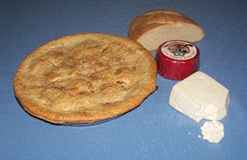 In August after several phone calls with grocery stores I found one with Wensleydale. I visited the store and they brought out the cheese that they had set aside for me. The photo on the left above is the aged Wensleydale.

Their specimen of Wensleydale was at least several months old. (I'm guessing at least 8 or 9 months.) It had mold on the rind and a few blue veins in the cheese. There were also cracks in the cheese. The guy at the cheese counter was not sure how long they had it in their back room. Wensleydale does come in an aged variety, but I have no idea if the cheese I purchased was ever meant to be so. I bought it anyway, and shared some with friends.

We liked it, but there wasn't anything great about it. The taste was similar to an aged cheddar. We liked it on baguettes or crackers, but didn't like it with sour dough bread. It was about as hard as Pecorino Romano, and had a similar texture as well.

I found another grocery store that usually stocks Wensleydale, but didn't have any at the time. They promised they would order me some, but they didn't get it for a few weeks. It was worth the wait, however.

The younger version of the cheese was crumbly, with a little bit of a milky taste to it. It was mild, didn't have much of an odor to it, and was a little moist. I liked it with on slices of pears or apples or on crackers. It was also good with honey. 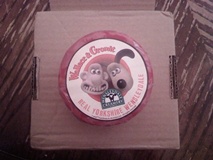 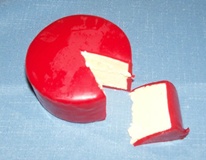 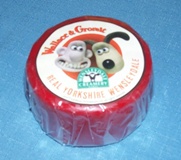 The Wensleydale Creamery makes a Wallace and Gromit brand of Wensleydale cheese. This I had to order direct from the creamery. It took about 5 days between the time I ordered the cheese from England before it arrived at my door in California.

Our favorite way to eat the Wallace and Gromit version was with pear slices. It also did well with honey.

My favorite of the three Wensleydales that I tried was the plain, young Wensleydale. It did not take long for me to develop a taste for it, and I kept having more and more until it was finally gone. My one regret is that I don't know more about it's origin, except that it came from England. My hope is that I got the real stuff that came from the Wensleydale Creamery in North Yorkshire, England, but it was cut into wedges and repackaged at the store I found it at. I'm hoping that next time I buy it one of the employees will have more information.

My guests preferred the Wallace and Gromit version. My kids did too, but I suspect that partly it was because they like cheese coated in paraffin wax. And the cartoon characters on the label probably helped as well. (They love it when we buy Gouda.)

When I served them both at the same time, they disappeared in roughly equal portions. This is definitely a cheese I plan on buying in the future, and I think I'll try some of the flavored versions that the Wensleydale Creamery offers as well. The onion and chives flavor sounds good to me.

There is lots more info about Wensleydale Cheese in our cheese guide.

I had the joy and pleasure of being there - in the Dales a few years back - the blue is wonderful - the cranberry, perfect - and the background setting of the Dales - was Heaven on Earth.