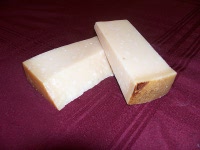 Most places I've read say that older Parmigiano Reggiano cheeses have a deeper color than the younger cheeses. I personally couldn't tell the difference in color between my 18 month and 36 month old cheeses. I asked my wife if she could tell, and they looked the same to her as well. Since the cheeses where so similar in color, I had to keep track of the two by the rind. The rind on the younger cheese was darker, and was imprinted.

One difference between the two cheeses in appearance was the number of amino acid crystal in the cheese. These crystals form from the breakdown of proteins as the cheese ages, and older Parmigiano Reggianos have more amino acid crystals in them. (Aged Cheddars and some other cheeses have the same thing happen to them.) Inside it's vacuum packed plastic that the cheese arrived in the crystals looked like white patches of mold to my wife.

When I cut off small chunks of cheese with a knife it became apparent that the older cheese was much more crumbly than the younger cheese.

The Stravecchio was more mellow in taste, but also much more complex at the same time. The taste was fuller, and didn't have the same acidic bite that younger cheese had. Both cheeses had the crunchy amino acid crystals, but the older cheese had much more. I enjoyed the crystals as it made the texture more interesting. The older cheese was also more crumbly and you could feel that in your mouth as you bit down on it. 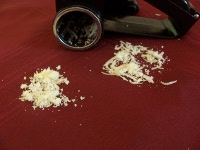 Parmigiano Reggiano is well-known as a grating cheese. I used the same rotary grater to grate both cheeses. As you can see in the photo the results were different for each cheese.

The Parmigiano Reggiano Stravecchio broke down into tiny crumbs in the cheese grater. It had an almost powdery texture. 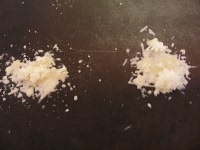 I melted some of the grated cheeses on a griddle to see how they might differ. The photo doesn't show it as well as I would have liked, but the younger Parmigiano (on the right) melted slighltly faster than the older Parmigiano (on the left). I expected the opposite to be true, since the older Parmigiano was shredded into much smaller pieces. Even though the younger cheese melted more quickly, the difference in time wasn't very large; on a 300 F griddle the younger cheese started showing signs of melting about 10 seconds sooner.

Some cheeses seperate or become oily when melted. Neither of my two Parmigianos did this.

I don't know if I could pick which one I like better overall; I really liked both of them quite a bit.

With the balsamic vinegar, I liked the younger cheese better, but still liked the older one.

I would strongly recommend both cheeses. Parmigiano Reggiano Stravecchio is much more difficult to find in stores than its younger version, so you may have to purchase it online like I did. But you may be fortunate enough to have a local shop that carries the older version too. Have you had either of these cheese? Please comment below. You can also learn more about Parmigiano Reggiano in our cheese guide.

I have to say that I prefer stravecchio in every way above 2 yr. parmigiano.

I have not compared the two, however, I love the Stravecchio. I purchased it as a happy accident. My local Costco had it when I was shopping for a wedge of Parmigiano Reggiano so I purchased it not knowing the difference. I found this sight internet searching to find out what "Stravecchio" meant. =)

I live in Denmark and order large quantities of PR for a nonprofit co-op from Azienda Agricola Zoocasearia dei Fratelli Mezzadri. I have tried 15, 26, 36, 50 and 70 month PR from this dairy. The best from this Azienda is 26 month. It is "soft", slices well and melts in your mouth. As soon as you get older than that, it gets hard and does not slice well. But others like the extremely old stuff (my sister), and perhaps in some dishes it has advantages.

But comparing 18-month and 36-month PR is a weird comparison because 18-month PR just is not ready! Folk wisdom says 2 years minimum. But it is not very often that you get to compare different ages from the same dairy.

found the stravecchio at trader joe's recently. was wondering what the difference was. thx for the article.

How would you properly make a cheese sauce using the stravecchio. Can you use a heavy cream?

The crystals that provide the crunch are lactose (milk sugars) that have calcified. For this the Italians say that stravecchio is an excellent source of calcium. Parmigiano is not supposed to slice, it's chunked off with that short knife with the round blade and pointed tip.

It requires taste and sophistication to recognize the difference between regular reggiano and 5 year old reggiano. Luckily my 9 year child has developed this taste and the reviewer has not. It is like comparing wine to vinegar. Please , if you require a proper review , let me know.

For some people there is no difference between a Fiat and a Ferrari, both have four wheels- that is what the author of this parody reflects in his report- a complet lack of cheese knowledge.

I accidentally purchased this Stravecchio while I was looking for Reggiano at Trader Joe's. So of course I had to Google what the difference was. The Stravecchio definitely has a more crumbly texture. I don't have a Reggiano on hand to actually taste a difference. I really like Reggiano and I rarely buy anything else but this Stravecchio is delizioso. I love them both!!

You can actually find the Stravecchio at Trader's regularly ????

they do have the stravecchio at trader joes every time i go which i usually purchase. around 14$ per pound

I usually don’t eat PR by itself due to acidity. I had nothing in the fridge and realized that the lone piece of cheese was Stravecchio. A whoops buy from Trader Joe’s. Low acid love the crystals, ate it straight up, then with Spanish evoo, then with balsamic, it’s my new low carb treat oh so good

Stravecchio I find should not be grated but rather eaten in chunks along with garlic stuffed olives,EVOO, Chianti, fresh figs,peaches,crispy Italian bread and enjoy.You will think you died and went to heaven