I first found out about Afuega'l Pitu while browsing latienda.com. Not knowing much about Spanish cheeses, I decided it was time to try some. My first pick was a cheese with a funny sounding name I had never heard of before, Afuega'l Pitu.

La Tienda sells 3 varieties of Afuega'l Pitu. I decided to try two of them, Afuega'l Pitu Atroncau Blanco and Afuega'l Pitu Roxu de Trapu. I ordered the cheese and invited some friends over to try it with me. I also bought a wedge of 6 month-old Manchego from a local grocery store, so that I would have a contrasting cheese. 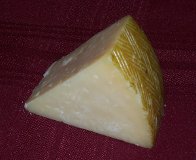 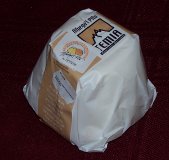 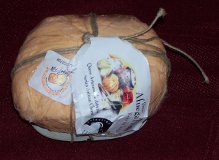 Since this review is about Afuega'l Pitu, I'll only briefly mention the Manchego. We found it to be similar to Pecorino Romano, but not quite as intense and a little creamier.

When you first bite into the white Afuega'l Pitu, it immediately reminds you of cream cheese, but just a second later you get a stronger, almost goat-cheese-like aftertaste. Some of my guests described it as an earthy aftertaste. The white cheese was spreadable like a cream cheese, but much drier and crumblier. It was almost easier to press the cheese onto our crackers and bread than it was to spread it on. 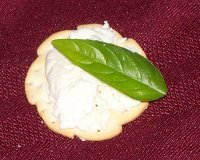 The big difference between Afuega'l Pitu Blanco and Afuega'l Pitu Roxu is that the latter has paprika added to the curds during production, giving the cheese a reddish color and a different flavor.

The Roxu definitely had a stronger bite to it. It was more interesting by itself than the Blanco by itself. It was also moister and much easier to spread. Like the Blanco, we tried the Roxu on bread and crackers, and in combination with other ingredients. We were surprised to find we liked the Roxu with honey on bread. The honey softened the taste of the cheese a bit.

It was difficult for most of my guests to pick a favorite between the two Afuega'l Pitus. They liked both. The Roxu was definitely more interesting, but the Blanco blended better with other tastes. Both cheeses were disappearing in roughly equal portions.

It wasn't hard for me to pick my favorite, however. I really enjoyed the combination of the the Blanco with the basil. So much that I had to try it again the next morning. I think it would make a great hors d'oeuvre, served either on sliced baguette or on crackers.

I was pleased with my experience with latienda.com. The cheese arrived the day I expected it, in an insulated container. La Tienda will only ship perishable items next day air or 2nd day air, and only if it will arrive on a weekday, so order by Wednesday to get your item by the Friday if you choose the cheaper shipping. If you order too late in the week, they ship on Monday to insure that your perishable product gets there in good shape.

Our Cheese Guide has a page about Afuega'l Pitu. There's also a link on that page to a site that has photos of Afuega'l Pitu being made.

Hello, I do not speak or write English well, but later they write my Amihan Lynn Martinque is American, but say that the pitu afuega'l who have tried, is a modern, somewhat adulterated the true afuega'l pitu. The pitu afuega'l was afraid of, the producer is my friend, is pausterizada milk, skim milk and is more of a fresh cheese or almost cuajda, that a true cheese. Alen Ducasse would say, a cheese of 20 days is a project of cheese, a cheese afuega'l pitu Silo King two months maturing in the cellar and a cheese from raw milk is also one cow and whole milk cattle , So it tastes like cheese before the cheese from the grandmother. Red pepper (atroncao) Silo King has a selection of peppers in the Spanish region of Extremadura with a slight itching, no excess to let you know paprika pork sausage. The pitu afuega'l Silo King is considered one of the great cheeses of Spain for all food critics and has received the most prestigious awards in the region of which the source is: Asturias

A very interesting review! You're very knowledgeable about cheese, as I wouldn't know what cheeses contrast or compliment each other! I think I'll have to try it sometime soon!