Urgelia (also called Queso de l'Alt Urgell y la Cerdanya) is semi-soft cows milk cheese made in Alt Urgell and Cerdanay in the Catalonia region of northern Spain. Urgelia melts well, has a robust buttery taste that is slightly salty, and a lasting, somewhat bitter aftertaste. It's interior is creamy white with lots of small holes and its rind is light brown.

The milk for Urgelia cheese comes from the Frisona breed of cattle and is unpateurized. Urgelia is bathed in a yeast brine prior to maturing, which adds to its aroma and taste. The cheese is cured for a short time -- only 45 days.

Urgelia has been granted a DO (designation of origin) by the Spanish government, which means that to be labeled Urgelia it has to be made in a certain area in Spain from the right kind of milk and following the right kind of procedures. 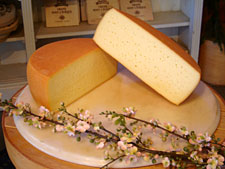 I love cheese of this brand