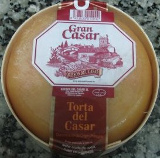 The cheese is named after its shape and its place of origin. The cheese originally came from the town Casar de Caceres. The shepherds who made the cheese used to call it "atortao" because it was shaped like a cake, or a torta.

Unlike most cheeses, Torta del Casar uses vegetable rennet instead of animal rennet. The rennet comes from the cardoon thistle plant (a very close relative of artichokes). The pistil from the flower is ground up. This adds to the cheese a tart flavor.

Torta del Casar is aged at least 60 days. Older cheeses have runnier insides. The cheese has a very full, intense flavor, and is somewhat salty and tart. It is best served at room temperature.

Torta del Casar is a somewhat rare treat. Only 8 dairies make Torta del Casar. It is made from the milk of Merino and Entrefina sheep, which only produce 75 liters of milk per year per sheep. In 2004 only 270,000 kilograms of Torta del Casar were made, and only 10% of that was exported, mostly to western Europe.

The Torta del Casar Regulation Counsel has a website dedicated to their cheese.

You can also watch Torta del Casar being made (in Spanish) in the video below. 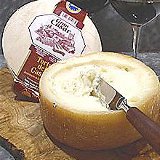 Though it is a rare cheese in North America, it isn't the big secret it used to be. You might get lucky and find it in a quality cheese shop.

Dear Cheesemakers,
can i get Torta del Casar in (South-)Germany (Bavaria).
I tried to buy via internet, but it could not be delivered because of warming up during delivery.

Any suggestions are welcome!
Thanx in advance!
Anton