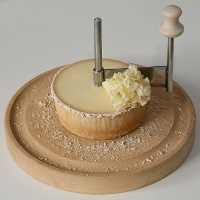 Tête de Moine is a pressed, unpasteurized cow milk cheese from the Bernese Jura region of Switzerland. The name means "monk's head." Tête de Moine is different from most cheeses in that instead of being sliced, it is scraped with a knife or another tool known as a girolle. When the top portion of the rind is cut off, the cheese resembles the tonsure (or shaved head) of a monk. Tête de Moine cheese used to be called Bellelay cheese.

Unlike many traditional Swiss cheeses, Tête de Moine is a small cheese. The short cylindrical shaped cheeses usually weigh about 2 pounds. The inside of the cheese is a straw yellow color, sometimes with small holes. The outside is red or brown with either a hard or a sticky rind, depending on which dairy the cheese came from. The texture of the cheese is semi-firm to firm.

The flavor is somewhat strong. It has been described as spicy, fruity, salty, beefy, and sometimes "barnyardy." Older versions of the cheese have a stronger aroma and taste, and so many people prefer younger cheeses, around 4 months old. When the cheese is scraped in the traditional manner, it releases more of its aroma and taste.

The cheese is often eaten with pepper and dried cumin. It can be eaten by itself, over salads, in fondues, or other dishes.

Tête de Moine is made from slightly skimmed, unpasteurized cow milk. The cheese is mildly cooked and pressed in molds. It is aged from 4 to 6 months. Periodically the cheese is brushed with a brine solution, adding to its flavor, and in some cheeses, producing a sticky rind. The rind darkens as the cheese ages. The cheese was traditionally made only from summer milk. Now it is made year-round.

Tête de Moine has been made for at least 800 years. It was originally made in the Abbey of Bellelay by monks. Records from the year 1192 mention the cheese from the abbey. There is evidence that the cheese was sometimes used as currency.

In 1797 the monks were evicted from the abbey by soldiers during the French revolution. Tête de Moine cheese was no longer made by monks in the abbey, but continued to be made by local farmers.

In 2001 Tête de Moine received AOC status, being the second cheese in Switzerland to receive that status. AOC status protects the name of the cheese. To be called Tête de Moine, a cheese has to be made in a certain geographical area, with unpasteurized milk from the local area. The cows must be pasture fed in summer and hay fed in winter, and never fed silage. Only 9 dairies are registered to make Tête de Moine.

In 1982 the invention of the girolle gave Tête de Moine cheese consumption a boost. The girolle was invented by a man named Nicolas Croiviser. His invention, seen in the photo above and the video below, made it easier to scrape the cheese than the older method of using a knife.

(We tried to find a good video of someone using a girolle to enjoy Tête de Moine on YouTube. We found several less-than-great videos. The best one we could find is below.)

There is a great video in an otherwise mediocre website at tetedemoine.ch. The video is almost 13 minutes long and compares modern methods of making the cheese with the methods that would have been used by monks. It should be noted, however, that a monk would not have used a girolle to enjoy his cheese as is seen in the video, since monks stopped making the cheese long before the girolle was invented.

There is also a website from the makers of the girolle with information about their product, including photos of the first 4 prototypes of the girolle. 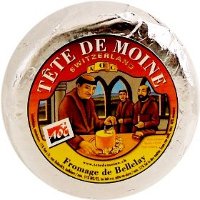 Is the blade on a Girolle supposed to be sharp? A family member gave us one along with a Choco'Rolle. It does not scrap well, but it is very dull. You could not cut yourself with it, only get a bruise. I want to also try it on Tete De Moine, but I need to know if it should be sharpened for use.