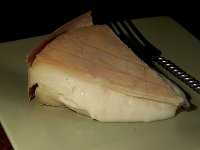 Stinking Bishop is a smelly, wash rind cheese from the village of Dymock in Gloucestershire, England. It was named as Britain's Smelliest Cheese in May 2009.

Stinking Bishop is a soft cheese made from the pasteurized milk of Gloucester and Fresian cattle. The rind is sticky and orange. The interior of the cheese is yellowish white to beige, with a few small holes. At room temperature, the cheese can become runny.

The cheese has a strong odor, sometimes compared to dirty gym socks or a rugby locker room. The taste of the cheese is, however, more mild than the smell would suggest. Some have described the taste as similar to mild vinegar. The cheese also has a somewhat bitter aftertaste. Most of the cheese's odor is in the rind.

Stinking Bishop Cheese was developed by a man named Charles Martell. Martell had been farming in Gloucestershire since 1972. Cheese was originally a side-thought. He had the goal of reviving the Gloucester breed of cattle, which in 1972 was down to only 68 heifers. Martell made Single Gloucester cheese partly as an effort to promote the breed of cattle. Martell experimented with other methods of cheesemaking, including following procedures for wash-rind cheeses made in the area in the Middle Ages. By 1995, Stinking Bishop Cheese was ready for commercial production.

Stinking Bishop got a boost in popularity and sales in 2005 when it was featured in the animated movie Wallace & Gromit: The Curse of the Were-Rabbit. The cheese was so potently smelly, that it revived Wallace from the dead. Sales of the cheese rose 500%. (Wensleydale received a similar boost from Wallace & Gromit.) 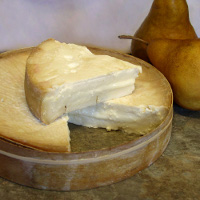 Stinking Bishop is not too well known outside of the UK. We did find some online at amazon.com.

We have 1 recipe for Stinking Bishop in our recipe section.