Sap Sago, also known as Schabziger (especially outside the U.S.) is hard, green, conical shaped cheese that comes from the Glarus canton of Switzerland. The cheese has been made since a least the mid 1400's. 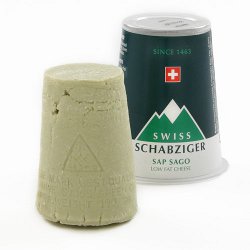 The cheese gets its light green color from the addition of the herb blue fenigreek, a type of clover that grows in Glarus.

The cheese is hard, and has a strong flavor and aroma. It is usually used as a grating cheese, over pasta or vegetables. It is sometimes mixed with butter as a spread on bread.

We've had a difficult time finding this cheese. Igourmet and amazon.com list this as "out of stock" as of January 2013. Maybe they'll get some soon.