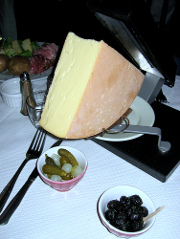 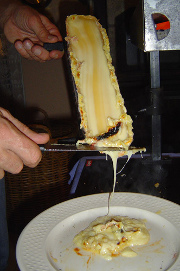 Raclette is a mild cow's milk cheese from the Valais canton of Switzerland. The name comes from the French verb racler which means "to scrape". Raclette is also made in France, in Michigan in the United States, and other countries.

Raclette is semi-firm in texture, with a dark beige rind and pale yellow interior. it has a mild, creamy, slightly nutty taste, and is aged usually about 3 - 6 months. It is made in 6 kg wheels. Raclette is great for melting.

Raclette is also the name of the dish that it is served with. The cheese is heated near a fire, on a raclette grill, or using a raclette machine, and then scraped with a raclette knife over small potatoes, gerkins (small pickles), sliced meats, and vegetables. 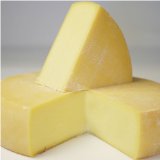 You can find Raclette cheese online at amazon.com