Pule is a cheese made in the Serbian town of Zasavica from Donkey milk. 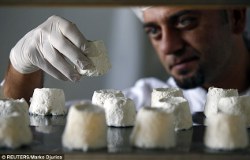 It's also the worlds most expensive cheese, selling at 1000 Euros for a Kilogram, or over 500 dollars per pound of white, crumbly cheese.

Balkan donkeys are milked by hand three times a day. (Milking machines for donkeys don't exist.) Each donkey produces about 2 deciliters a day of milk, meaning it takes the milk from 5 donkeys to make a liter, or about a quart. In turn, it takes 25 liters of milk to make one kilogram of Pule cheese.

That's the milk of 125 donkeys to make 2 pounds of cheese.

And if that's not crazy enough for you, in December of 2012, millionaire Serbian tennis star Novak Djokovic decided to buy all of it for a chain of restaurants he plans to open in his home country. And by "all of it", we mean the worlds entire supply of donkey milk cheese.

Despite reports that all of the world's Pule cheese are being purchased by tennis star Novak Djokovic, we did find a site selling 50 gram servings for a mere 6000 Serbian Dinars (about 70 dollars, U.S.).

I have 2000 donkeys and can produce this cheese. If anyone needs, send me email.

Hello do you really have 2000 donkeys? Where are you located?

I await your reply.

I like to buy donkey cheese how can i get this cheese ?