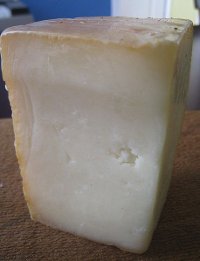 P'tit Basque (sometimes spelled Petit Basque) is a pasteurized sheep milk cheese from the mountainous Basque area of southern France. It has been made since 1997 by the large French dairy company, Lactalis.

P'tit Basque is a small cheese, weighing about 1.25 lbs. It is cylindrical in shape, and only about 3 inches high. The the thin rind is brown and imprinted with basket weave indentations. The interior is a firm, slightly moist, butter-colored cheese with little or no holes.

P'tit Basque is aged 70 days. It is coated in a plastic film, or waxed, to keep the cheese from drying out and from mold forming.

Lactalis' marketing department would like you to believe that P'tit Basque has been around for centuries. Their website says "Traditionally, shepherds made this small cheese from a leftover curd set aside after milking their ewes." And their t.v. commercials, (see video below,) portray it as a traditional cheese. But P'tit Basque is a relatively new cheese. Lactalis has been making it since 1997. 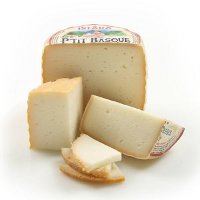 P'tit Basque shouldn't be too hard to find in the United States, since it is so heavily exported to the U.S. We've found it in several grocery stores with decent cheese counters. If you are having trouble finding it locally, you can buy it online at amazon.com.